From WikiCU
(Redirected from BC)
Jump to: navigation, search

Barnard College is a liberal arts college for women located at 117th Street and Broadway next to Columbia's Morningside Heights campus. It is part of the prestigious Seven Sisters Colleges (the other members being Radcliffe, Smith, Wellesley, Bryn Mawr, Vassar, and Mount Holyoke). It was founded in 1889 for female undergraduate students at a time when Columbia College was an all-male college.

Barnard is an independent institution affiliated with the University via an intercorporate agreement negotiated between the two institutions. Barnard has an intricate, historical, often complex, and sometimes confusing relationship with Columbia.

The current President is Sian Beilock. 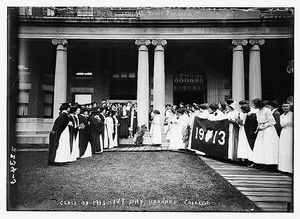 Barnard's pre-history dates back to 1876, the first time the Trustees of Columbia were petitioned to admit women. In 1879, Columbia president Frederick A. P. Barnard included in his Annual Report to the Trustees an argument in favor of admitting women, suggesting that if Columbia College were going to be of any use in his vision for a University, then they could at least admit women. He continued to include his arguments in his annual reports, and in 1882 printed his greatest hits from the previous three years in a volume titled "The Higher Education of Women." In 1883 the trustees finally responded in part by establishing the Plan for the Education of Women in Connection to Columbia College, which allowed any woman over the age of 17 who passed an entrance exam to sit for all of the exams Columbia College students took, and on successful passage and payment of $5, granted her a certificate bearing their seal. Beginning in 1886, the trustees would begin offering an actual Columbia BA degree to course completers.

In the spring of 1889, responding to a request by Annie Nathan Meyer and others to establish a formal annex for women's education at Columbia, the Trustees agreed to provide a space and Columbia faculty members to teach women.[1] And thus, on October 7, 1889, Barnard College was born.

On October 23, 1890, the Spec announced its intention to cover affairs at Barnard College with this wonderfully condescending (and sexist!) editorial:

"With this issue Barnard College makes her bow--we beg the young ladies' pardon, her courtesy [curtsy]--to our readers. It is, for the present at least, our intention to make the news of our sister school a regular--and of course a pretty--department of our paper.

In if the course of time, however, we find that our sister students, prepossessing and spirituelle though they be, are not interesting and alert, we shall indeed feel obliged to sacrifice their publicity to more pressing news!

We shall, therefore, anxiously await from our correspondent the account of something 'real naughty and shocking' to keep alive interest. We should not like to suggest a love affair with a tutor; but if such an event came to pass spontaneously in the course of time, nothing could be further from our profession of impartiality than to restrain the news of it."

Beginning in 1891, Barnard began operating as an affiliate of Columbia, with further refinement of the arrangement in 1893. The arrangement was finally formalized in 1900 with the first Columbia-Barnard Intercorporate Agreement. As part of the agreement, the President of Columbia University also served as President of Barnard College, while Barnard's chief officer held the title of "Dean." In 1952, Dean Millicent McIntosh chose to adopt the title of "President" as part of Barnard's growing assertion of its independent status.

Barnard spent a great deal of the 1970s and early 1980s in negotiations with Columbia over a potential merger and undergraduate co-education. Ultimately, Barnard chose to remain independent, and in 1982, Columbia College went co-ed on its own.

Barnard has managed to survive, and thrive, thank you very much, while co-existing with the co-ed college across the street ever since.

Barnard is institutionally and financially independent, while academically and socially linked to Columbia. Institutionally, Barnard has its own board of trustees which oversees the college's operation, its own endowment, its own faculty, its own campus (Columbia does not share ownership of any of Barnard's campus buildings), and its own administration. Barnard pays Columbia for access to utilities, the University's libraries, and other facilities such as Lerner Hall. Columbia University plays no role in admitting Barnard students. Academically, the two schools offer near-complete course cross-registrations to students of the other institution, and Barnard graduates receive their degrees from the Trustees of Columbia University, a tradition dating back to the Collegiate Course for Women, before Barnard's foundation. With some exceptions, students at both institutions participate in an integrated social scene, including access to the same extra-curricular activities.

The heart of Barnard's campus is Barnard Hall, aligned with the Barnard gates and the main east-west axis of the Columbia campus. It was built in the style of Columbia's academic buildings across the street and houses the college's athletic facilities, including LeFrak Gymnasium and the Barnard pool, as well as classrooms and lecture halls. Milbank Hall is the oldest building on campus; it was the original building when Barnard moved to Morningside Heights with Columbia in 1897. In between are a number of academic buildings, including Altschul Hall, Lehman Hall (home of the Barnard Library), and the new Diana student center, completed in February 2010.

Over 1000 Barnard students live in the The Quad dorms immediately south of Barnard Hall. The rest live in Barnard dorms within the Morningside Heights neighborhood (though some, like Cathedral Gardens, are very far-flung). Hewitt, the main dining facility for Barnard students, is located mostly below street level underneath these dorms.

The Barnard campus is connected by open-access tunnels, which make traversing campus easy in inclement weather, which is more than can be said for Columbia's tunnels, which require virtual spelunking skills to access in some cases.

Barnard students, unlike their Columbia College counterparts, do not have a Core Curriculum, but rather engage in an elaborate distribution requirement known as the Nine Ways of Knowing, which includes a tailor-made First Year Seminar and a number of electives within a given number of categories.

There are many notable Barnard alumnae including Anna Quindlen, '74, Martha Stewart, '62, and Jhumpa Lahiri, '89.

When it was announced in March 2012 that President Obama would be speaking at the 2012 Barnard Commencement, the Internet (i.e. BWOG and Spec comment sections) had a hissy fit, inciting what is now popularly known as "Obamanard," with students from both sides of the street engaging in intense and anonymous conversation online.