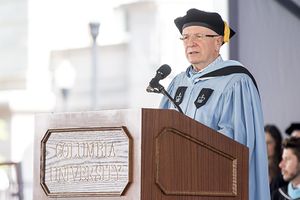 After flipping a coin to determine whether to attend Columbia or Yale (he'd won a scholarship to both), McNally wound up graduating Phi Beta Kappa from Columbia, where he majored in English. Among his teachers were Steven Marcus, Lionel Trilling, Jacques Barzun, and Mark Van Doren. He also wrote the 1960 Varsity Show, entitled "A Little Bit Different", and wrote for Columbia College Today. He eventually won a scholarship from his work in creative writing class that allowed him to travel to Mexico, where he wrote his first script.

He has received four Tony Awards, two Guggenheim Fellowships, an I.A.L. Diamond Award, and a lot more hardware than the Columbia Athletic Department.