The Ticket and Information Center (TIC) is a project of the Office of the Provost and the Arts Initiative at Columbia University. The TIC is a full-service online and live box office and information center located in the lobby of Lerner Hall. Since opening in January 2008, the TIC has sold over 500,000 discounted tickets to Columbia students. 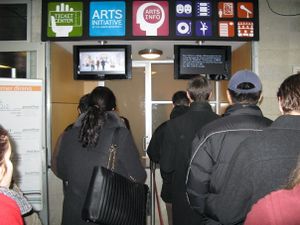 The TIC at Lerner Hall

Through the TIC, Columbia students, faculty, and staff can:

By special arrangement with Telecharge and select Broadway producers, the TIC created an alternative to student rush by selling student-priced tickets in advance. In the past, the TIC has provided discount tickets to Broadway and off-Broadway shows including A Chorus Line, August: Osage County, Avenue Q, Boeing Boeing, Chicago, Cirque Dreams: Jungle Fantasy, Cry Baby, Curtains, Gypsy, Hairspray, Les Liaisons Dangereuses, Mamma Mia!, My First Time, Passing Strange, The Phantom of the Opera, Rent, Spamalot, Spring Awakening, and Sunday in the Park with George. Discount student tickets normally fall between $20 and $30. Students can log in to a secure site through the TIC website to check the availability of shows and dates with tickets for purchase. Tickets purchased through Telecharge may be picked up at the theater's box office only by showing one valid CUID for each ticket purchased.

Registering Events with the TIC

Recognized students groups can register on-campus and sanctioned off-campus events through the TIC through a request form found on the TIC website. The TIC will help groups sell tickets or keep track of event attendees through a RSVP list. The TIC requests that groups give notification of an event at least two weeks prior to its start date.

Individuals, student organizations, classes, departments, and other groups wishing to purchase group tickets may do so through the Arts Initiative website. Interested groups can select an event from a TIC calendar listing or another resource and submit a Group Ticket Request form, available on the TIC website. TIC staff will then try to find a price and date suited to the group's needs.

Some of the events made available to students in collaboration with the TIC include: 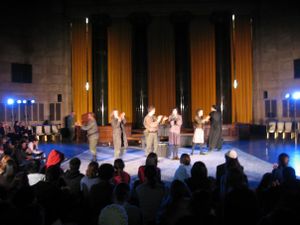 Staged reading of the Iliad by Aquila Theatre Company 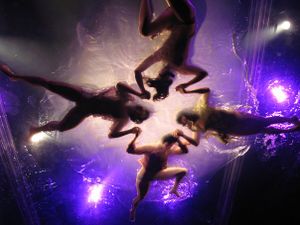 Performers at Columbia Night at Fuerzabruta

Mondays & Sundays - CLOSED. Tuesdays - Saturdays 1 pm to 8 pm. The TIC is open two hours before most on campus events ticketed through the box office.

The TIC is located in the main lobby of Alfred Lerner Hall to the right of Cafe 212. Its mailing address is: