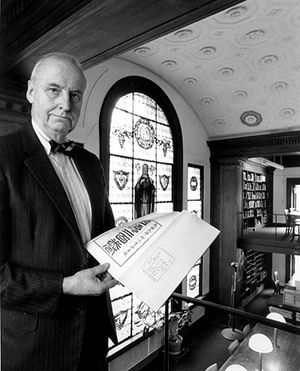 William Theodore de Bary CC '41 MA '48 PhD '53, LittD (HC) '94 (1919 - ) is an East Asian studies expert. He is the John Mitchell Mason Professor, Provost Emeritus of the University, and Special Service Professor in the East Asian Language and Culture Department. A longstanding Columbian, he has played a significant role in the 20th century history of the university.

De Bary has said that baseball legend Lou Gehrig's connection with Columbia was one of the primary reasons he was motivated to apply to the school while he was growing up in nearby New Jersey.[1] He is now a Columbia alumnus many times over. He earned his AB from Columbia College in 1941 (where he was a member of the Senior Society of Nacoms[2]), his MA in 1948 after returning from World War II, and his PhD in 1953. He was awarded a LittD (Honoris Causa) in 1994, when he finally turned in the "minor revisions" he was asked to make to his 1953 doctoral dissertation. De Bary also briefly studied at Harvard before the breakout of the war. In addition, he holds honorary degrees from Loyola University of Chicago and St. Lawrence University.

When World War II began, de Bary ended his studies at Harvard and served in American military intelligence in the Pacific Theatre.

De Bary began teaching at Columbia in 1953, after completing his dissertation. Later, de Bary was active in faculty intervention during the 1968 protests and turned down the Deanship of Columbia College to serve as the university's Provost from 1971 to 1978. In the De Bary Report of the 1980s, he advocated the reshaping of Columbia College's Core Curriculum to include "Great Books" classes devoted to non-Western civilizations.

A recognized educator, he won Columbia's Great Teacher Award in 1969, its Lionel Trilling Book Award in 1983 and its Mark Van Doren Award for Great Teaching in 1987. He is also a recipient of the John Jay Award for distinguished alumni, which he won in 1989, and an Alexander Hamilton Medal.

De Bary refused to accept appointment as a University Professor in 1978, as he did not want it to seem like a backroom deal had been struck. Instead, he accepted the just-created John Mitchell Mason Professor of the University, a post created specifically for former Provosts. He retired in 1990, but still teaches up to five courses per semester on a pro bono basis. Usually these courses include an introduction to major topics in East Asian civilization, an intermediate literature course in Chinese humanities, an intermediate literature course in Japanese humanities, a graduate-level survey of either Chinese or Japanese philosophy (alternating each year), and the Columbia College senior colloquia Nobility and Civility.

He is additionally famous for rarely missing a Columbia football game since he began teaching at the university.

De Bary was the author of the Report of the Commission on the Core Curriculum, better known as the de Bary Report, a study of the Core Curriculum issued in 1988. The report was a sober assessment of the state of the Core, and it made realistic proposals for reestablishing it that were not followed. Another part of its legacy was a proposal for the establishment of an 'Extended Core'. A reduced version of this would become the Major Cultures requirement (now Global Core).

In 1995, Prof. Timothy Cross, then a graduate student preceptor teaching core classes, wrote An Oasis of Order, an essay detailing the history of the Core on its 75th anniversary. The last chapter of the essay is devoted to the de Bary Report's recommendations for an "Extended Core."[3]

Amusingly, de Bary's penchant for leading studies and writing reports dates back to his days as a student, when Student Board appointed him to lead a study on integrating campus life by investigating the problems facing extra-curricular activities and social affairs.[4] His efforts led to the formation of the Student Association in 1940.

De Bary has edited numerous books of original source material relating to East Asian (primarily Japanese and Chinese) literature, history, and culture, as well as making the case, in his book Nobility and Civility, for the universality of Asian values. He is recognized as essentially creating the field of Neo-Confucian studies.