Difference between revisions of "Van Amringe Quadrangle and Memorial" 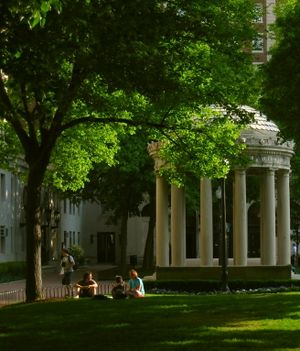 Van Am Quad and Memorial

The Van Amringe Quadrangle, popularly known as Van Am Quad, is located between Hamilton and John Jay Halls, immediately in front of Wallach Hall, Hartley Hall and the Taint Gate. The quadrangle is named after John Howard Van Amringe, the popular Dean of Columbia College. It consists of two lawns separated by the Van Amringe Memorial, a rotunda housing a bust of Van Amringe flanked by inscribed benches.

The area around the rotunda and Taint Gate is considered one of the most picturesque spots on campus. Bright-eyed first years and also smokers congregate at the rotunda to live out their Cambridge fantasies. The gate itself is topped by a working clock donated by the Class of 1906.

Until very recent decades, Columbia College Class Day was held here rather than on South Field.

In 2011, the lawns, where grass had struggled to grow for years, were re-landscaped with sand-colored gravel and picnic tables and benches were added.[1]