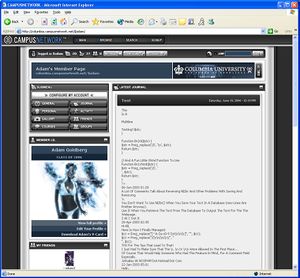 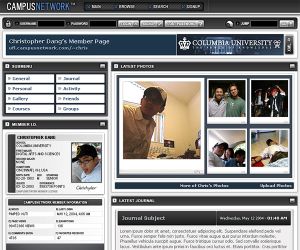 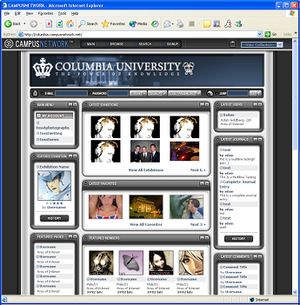 Before the "News Feed", there was the CUCom home page. Emphasizing the whole "community" thing, you know.

CampusNetwork (née CUCommunity or CUCom, née SEASCommunity) was an online community for Columbia students, and later other schools, that was first launched by Adam Goldberg in the summer of 2003. It folded in 2006 after failing to compete with growing Facebook.

SEASCommunity was conceived of and launched by Adam Goldberg in the course of his work for ESC during the fall of 2003. Goldberg wanted to address the common complaint that Columbia lacked a sense of community. Seeing a chance to bridge the gap between the engineering and liberal arts colleges, Goldberg rebranded the next version of the site CUCommunity, and launched it during winter break before the Spring 2004 semester. In February of 2004, Harvard's student run online facebook, TheFacebook (now simply Facebook), opened sites at a number of schools including Columbia. CUCom's base of dedicated users viewed it as an encroachment and briefly waged a highly public 'e-war' on the Harvard site.

In response to TheFacebook's expansion beyond Cambridge, Goldberg decided to take the next version of his platform beyond Columbia's gates. After seeking feedback from and sharing betas with some of CUCom's more prolific members, Goldberg and classmate Wayne Ting launched CampusNetwork across a range of schools in the Fall of 2004, offering a suite of features that Facebook did not come close to matching. Unfortunately Facebook was already well on its way to gaining a critical mass to achieve a network effect that would guarantee victory.

Because of the existence of a homegrown product on campus, Facebook didn't achieve the success on Columbia's campus that it had at other schools in its initial foray. This changed during the summer of 2004 when the Class of 2008, none the wiser about the existence of Columbia's own network, flocked to join Facebook as soon as they received their .edu email addresses (it was not until the Class of 2009, who had joined as high school students, that Facebook was open to students before they got college email addresses). Much to the chagrin of CUCom's now-partisan user base, when the Spectator did get around to doing a serious write-up on CUCommunity in Fall 2004, it was already being framed in terms of "the Age of TheFacebook."

Ultimately CampusNetwork lost out to Facebook, if there even was a contest. Following the 2004-2005 school year, Goldberg closed down the CampusNetwork sites for all schools but Columbia. In a nod to his original and most loyal userbase, Goldberg attempted one more revision, a "back to basics" spartan design released only to the Columbia campus. As Facebook added more features and CUCom's remaining users moved on, the site was finally put to rest in 2006, ending a brief but colorful period in Columbia social history.

At its peak, 75% of the Columbia student body were registered members, and a total of 240,000 users at all the available universities, although a only a fraction were likely active users.

CUCommunity developed its own campus sub-culture, with celebrities including the infamous Angry Cell Phone Guy.

While many students registered for CUCommunity, a handful became dedicated users. Over time, they organized a handful of "in real life" get togethers to meet each other, as many of the community's online friendships had developed completely independent of other forms of campus social activity.

Many of the malcontents from CUCommunity (Feinstein, ttan, Reaganaut, Pacman, absentminded, among others) now spend their free time editing articles here at WikiCU.

CUCommunity, and later CampusNetwork, offered a raft of features that the original and early versions of Facebook did not include. The early versions of Facebook consisted of static personal profiles (name, school, class year, activities, favorite music/tv/movies/books/quotes), a profile photo, and a list of friends that linked you to their profiles. By comparison CUCom/CN offered photo sharing (galleries and exhibits), journal sharing, cross-profile comments, and even a proto-wall (the Shoutbox).

Besides offering users the ability to create and share content, which Facebook originally did not, CUCom/CN offered a very different vision of what a Social Network could/should look like. Whereas Facebook is concerned with your personal social graph (how everyone/thing relates back to you) and offers a personal social network, CUCom/CN was built around the concept of being a member of a sharing community. This is primarily exhibited by how content was/is pushed out in each system. In CUCom/CN, the site's homepage displayed all recent activity in the community - the latest journals, the latest pictures, the latest comments on journals, "Hot Journals" (those most commented on most recently) etc. The focus was on sharing with your peers in your school community. In fact, while CUCom/CN effectively offered photo sharing, it was clearly geared towards sharing photography and graphic design as an art, as opposed to personal photos. Albums were called Galleries, and individual photos were called Exhibits. The push was to share your intellectual output, whether prose, or visual, with a creative community broader than just your friends.

Facebook, by contrast, did not add this kind of content pushing/sharing until the implementation of the then-controversial News Feed. Again, though, this only pushed your personal network's activity, rather than that of your broader school community. For only a brief time, when Facebook was built around the concept of "networks", like your school or work organization, there were mostly neglected "Network" pages.

One other major difference was that while Facebook was hidden being a password wall (which for a time required the user to have a .edu email address to get behind), CUCom/CN content was out in the open; anyone surfing the internet could find it, though it was unlikely to turn up on a search engine as Goldberg has set up his site so as to avoid indexing by the search engines. Of course, this also reflects in part the difference in vision for the two sites: a personal profile and personal content may need privacy controls, whereas a community for sharing and collaborating on art and ideas might not. In any case, CUCom/CN never lasted long enough for privacy to become a major concern.