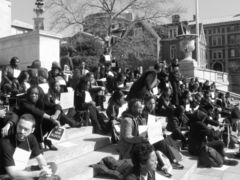 CUCSC Silent protest on the Steps 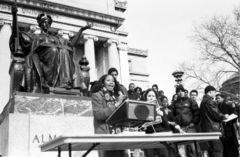 The Columbia University Concerned Students of Color Protest of Spring 2004 was a week long protest prompted by a series of "racist incidents" on campus during the 2003-2004 academic year. The lasting accomplishment of the protests was the establishment of an Office of Multicultural Affairs.

First came the Fall 2003 Orgo Night script and promotional flyers that were allegedly sexist and made fun of ethnic studies. Then in February came the Affirmative Action Bake Sale incident. On the same day that BSO students were presenting their concerns to the administration, The Fed published the Blacky Fun Whitey cartoon. And naturally what happens? The only thing Columbia students know how to do: students form a coalition (Columbia University Concerned Students of Color) and hold protests!

Silent demonstration on Low Steps on Monday February 23 through Wednesday February 25. Hundreds of students dress in black and wear signs that say "I am being silenced." No one dares to point out the obvious- that it's a silent protest and therefore they're silencing themselves...

Thursday February 26, speak out rally on the steps.

Feeling dissatisfied and prompted by new incidents in 2006, students formed SHOCC, which carries on some of CUCSC's work.