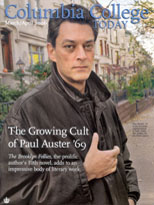 Auster on the cover of Columbia College Today [1]

Auster said of his undergraduate years that they "were not about making plans, not about preparing for my financial future. They were about books, the war in Vietnam, the struggle to figure out how to do the thing I was proposing to do," i.e., become a writer. The books he read during his first two years allowed his brain to "catch fire". Auster then went abroad to Paris, where a fight with the study abroad director caused him to momentarily drop out of college. As soon as he returned to New York, however, he dropped back in.

Despite being a rather quiet, bookish student who preferred little more than a drink at the old West End, Auster somewhat passively participated in the 1968 protests, hanging out in Mathematics Hall during the occupation and getting beaten and arrested by the NYPD. Later, he described himself as "crazy" during the period and found the protests to have been somewhat misdirected.[2]

After graduating, he spent a year in GSAS studying English. Much later, he was a one-semester writing professor at the School of the Arts, and said that his return to campus made him realize that he had been "much unhappier" as an undergrad than he had realized. In other words, he's like most Columbia alumni, only famous.