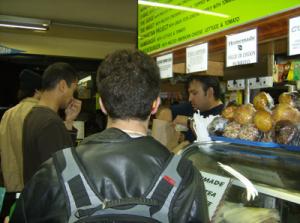 Patrons in line at Ham Del

Hamilton Deli or HamDel is a small sandwich shop/supermarket on Amsterdam between 115th and 116th Streets. It was established in 1991. Ask for the gold card and you'll get a free sandwich after 10 purchases.

HamDel has awesome sandwiches and rapid-fire service. It also has cleverly named burgers, delicious breakfast sandwiches, overstuffed heroes, and a fresh salad bar that's better than the ones at Strokos and Milano Market.

Often infested by law and business students, it's one of the few eateries open 24/7 during finals. Maybe this is one of the reasons it was once Meghan McCain's favorite local restaurant.

The ABC Special is a sandwich which is not on the menu at Hamilton Deli. To get it, you have to know what it is and ask for it specifically. It is:

It's fattalicious. And extremely expensive for a tiny sandwich at $4.88 after tax.

The Tour de HamDel is a grueling gamut run only by the stout of heart (a gold card is also nice). To complete it, one must consume at least one of every single type of combination hero at Hamilton Deli, not omitting the ones on the red and green signs on the side. This is 29 sandwiches in all, including the elusive Philly Chicken Steak. Rob Trump was the first person on record to complete the Tour (though it's quite possible he made it up himself).

In January of 2008, HamDel introduced a combination hero, the Buffalo Blue. The Blue consists of a chicken cutlet slathered in mozzarella, bleu cheese, and Buffalo wing sauce. Trump's reign proved short-lived, as Peter Mende-Siedlecki, CC '07 and current employee of the Psychology Department, beat him to the Blue. Mende-Siedlecki, a Buffalonian himself, thinks the new sandwich is awful, but worth it. The defeated Trump stalked off somewhere to write the 114th Annual Varsity Show.

In February of 2009, however, a reversal of Herculean proportions occurred once again upon the release of the Ben Arnold. Rob took the opportunity to scarf one down just as Peter was returning from Dartmouth. Rob pulled into the lead again, claiming the Tour de HamDel title, at least until the next sandwich premieres. A list of the Top 10 HamDel sandwiches has recently found its way onto the internet.

The introduction of 24 hour JJ's is mourned as the reason HamDel reduced their hours from 24 to 18, as it severely impacted their business.