Pi Kappa Alpha, Iota Lambda chapter, is one of the fraternities recognized by the Interfraternity Council. The fraternity more commonly goes by its nickname Pike.

The chapter again earned a 5 star ALPHA Standards of Excellence rating in spring 2013.

Pike has consistently been one of the top fundraisers for Relay for Life. In 2012 the chapter raised $12,325, more than any other campus organization, and in 2013 they raised over $1,000.

Pi Kappa Alpha "sees philanthropy as a priority and always looks to give back to the community." Annually, the chapter has participated in Relay for Life and Columbia Community Outreach, raising over $20,000 and accumulating over 5,000 service hours over the past 3 years.

Pike's flagship event, Taylor Trudeau Cycle for Life, has raised over $5,000 for Leukemia, Lymphoma, and Melanoma research in honor of a brother who passed away from blood cancer. Pike has also partnered with other organizations, like NYCare, to further reach out to the NYC community as a whole. Bothers are also heavily involved in other service and philanthropic efforts including tutoring, health education, community development, and more.

Previously earned awards from the Inter Greek Council include:

Pi Kappa Alpha "selects potential brothers based on the criteria of 'Scholars, Leaders, Athletes, and Gentlemen' or S.L.A.G., aiming to find candidates who exemplify these traits."

Pikes are "active within the Columbia community in student council, debate, rugby, crew, intramural sports, a cappella, squash, and more." 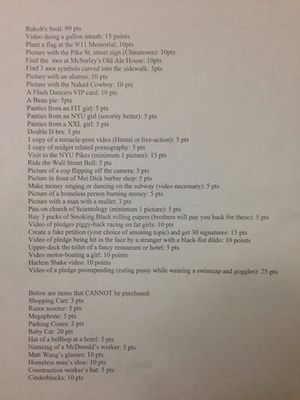 The scandal resulted in a closed hearing before the Greek Judicial Board, the results of which were never released, since, like all official hearings at any American University of legitimate international community, information is confidential.