The Football Team is ostensibly a NCAA Division I Football Championship Subdivision (formerly Division I-AA) football program, playing its home games at Robert K. Kraft Field at Lawrence A. Wien Stadium (at Baker Athletic Complex) in the beautiful Inwood neighborhood at the northern tip of Manhattan. The current head coach is Pete Mangurian.

The team traces its history back to the 4th intercollegiate football game in history, a 6-3 loss to Rutgers in New Brunswick, New Jersey on November 12, 1870. Since 1956, the team has formally been a member of the Ivy League athletics conference. Prior to that, the team played as an unaffiliated independent (with the bulk of its schedule typically against future ivy league schools), much as Notre Dame and the Army and Navy Academies do to this day.

The team has served as a shining example of sisyphean determination in the face of utter futility. In 58 Ivy League seasons, the team has recorded only one league championship (1961, which was shared) and only three other winning seasons against ivy league opponents (1962, 1971, and 1996), while going "0-for-Ivy" 10 times in the same period. No Columbia head coach since the Great Depression has a winning record. Nevertheless, like sisyphus, the team lines up to play 10 games a year, every year.

The football team finished 2006 at .500 for the first time since Marcellus Wiley CC'97 played defensive end in 1996. Football achieved that mark in just one season under Norries Wilson, the Ivy League's first African-American head football coach. 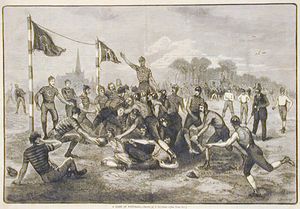 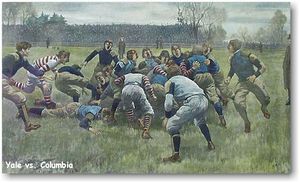 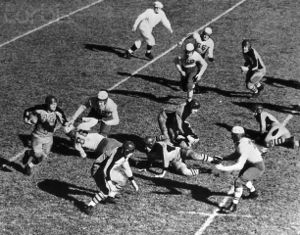 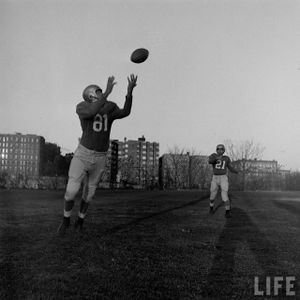 Players practice in 1947 about a month after their legendary win over Army.

Football existed as a "campus diversion" at Columbia since at least 1824, when games involved "seniors and sophomores lin[ing] up against juniors and freshmen".[1] Columbia's college football team was formed in 1870, and played one game, the fourth college football game ever, against Rutgers. Presciently, they lost. They played their second game against Yale in 1872 and continued playing games through 1884.

On November 23, 1876, Columbia joined Harvard, Princeton, and Yale at the so-called "Massasoit Convention" to decide on uniform rules for the collegiate football, which rapidly spread throughout college football.[2] This convention is sometimes referred to as the "IV" League -- for the Roman numeral four -- which was supposedly the original Ivy League.

The sport briefly disappeared from campus before returning for three years from 1889-1891, before disappearing again.

Students made their first bid at truly organized football in 1899 when they raised funds to hire a coach for the first time, hiring George Sanford away from Yale for $1500. After 7 successful seasons, however, University President Nicholas Murray Butler banned the sport after the 1905 season, claiming it was too rowdy. In all seriousness, football was facing a crisis over its increasing violence, including the death of some players. Columbia attempted to lead a national ban, but found itself largely alone.[3] Football would eventually return after a ten year break in 1916.

After the Butler-ban, the Lions enjoyed some success on the gridiron, although not before a series unfortunate events. Looking to shape up the football team in the post ban years, Columbia hired former Harvard coach Percy Haughton, however Haughton collapsed and died midway through his second season. Seeking a coach of similar or greater stature, Columbia managed to lure Knute Rockne, who at age 37 was already a legend as head coach of Notre Dame, to New York with a $25,000/yr contract.[4] However, in their hubris, the Columbia negotiators leaked news of Rockne's arrival, embarassing Rockne who was still under contract at Notre Dame. Rockne washed his hands of Columbia and remained in Indiana.

Despite the failed attempt to hire Rockne, the team found success anyway. After a string of positive seasons in the 20s, the University hired Lou Little away from Georgetown. Little would remain at Columbia for 27 seasons. Little's tenure was highlighted by two successful periods, and two famous victories. From 1931-1934 the Lions went 29-4-2, and highlighted their success in 1934 with a victory in the Rose Bowl against Stanford, in what was the precursor to the national championship.

Little experienced great success again in the immediate aftermath of World War II, leading the Lions to an 8-1 season in 1945, and a 7-2 season in 1947, which featured by a famous upset victory over the cadets of Army, who were undefeated in 32 games and coming off three straight undefeated seasons and national championships.

Arguably the greatest player to come out of the program was Sid Luckman CC 1939, an All-American quarterback who went on to pioneer the modern passing game under head coach George Halas of the Chicago Bears, and led the team to four NFL championships in the 1940s.

At some period during this period, the football team was even involved with the Manhattan Project, employed to carry uranium on their strong backs.[5]

In 1956 the Ivy League football conference was formalized, bringing Columbia together with the seven schools we know and hate today.

In 1961 the team shared their only Ivy League title with Harvard. The following year the team went 5-4-1.

The 1971 team deserves some mention, as their two incredibly narrow league losses (by 2 points to Harvard, and 3 points to Cornell) cost them a share of the league championship, split between Cornell and Dartmouth, who both finished 6-1 in league play.

While the team may not have been good after 1963 (barring a brief glimmer in 1971), it didn't achieve true awfulness until 1979, when Columbia football began a 13 season stretch over which the team went 10-117-2, winning more than one game in a season only once (1988). The team reached its utter nadir during a record-setting 44-game losing streak, which included four straight seasons of 0-10 (1984-1987), which meant players in the class of 1987 graduated without ever winning a game. The jubilation that ensued upon the end of the streak was possibly the largest outbreak of school spirit ever seen at Columbia. Of course, the losing would continue for several more years.

1992-Present: Return to Mediocrity and That One Year We Were Good

Towards the end of Columbia's Anni Horriblis, they hired Ray Tellier, whose 14 year stint is second only to Lou Little's 27 years as head coach. After three straight 1-9 seasons to open his tenure, he rebuilt the team, culminating in a second-place 8-2 season in 1996. A 40-0 shellacking at the hands of eventual-undefeated-champion Dartmouth put to rest any hopes of repeating the feat of 1961.[6] Tellier's teams went an 'eh' 18-42 the next few seasons, bottoming out with a 1-9 (0-7 Ivy) season in 2002 that ended Tellier's tenure. He went on to serve as an administrator in the Athletics department.

Columbia is still searching for answers in football, with four coaches succeeding Tellier in ten years, wracking up 6 seasons of 8 or more losses, and no winning records against ivy opponents.

While as a general rule the team has been bad, in their defense, they have participated in a number of entertaining games (and even won some of them!) including the first three editions of the Empire State Bowl, which included two stunning Columbia come-from-behind victories in 2010[7] and 2012[8], and the 2003 win over Princeton, achieved on a last-play-of-the-game hail mary TD plucked out of the air by Columbia tight-end Wade Fletcher - Columbia's first win on the road against Princeton since 1945.[9]

No one really has a great explanation for why it's so hard to develop a winning football team at Columbia, but a number are often floated. First, the practice facilities at Baker Athletics Complex are far away from the main campus in Morningside Heights. Second, there is weak support because the student body is more often interested in all the other diversions in Manhattan. Third, coaches find it hard to recruit potential football players given Columbia's lack of a winning tradition. Fourth, Columbia probably has a hard time recruiting coaches, given that only one coach since 1919 (Frank Navarro) has found another head coaching job after their Columbia tenure.

Sometimes they bribe kids to go to games, but attendance remains low[10].

Homecoming is traditionally the most heavily attended football game of the year, with significant alumni and student presence. Columbia has not won at Homecoming since 2000.

A recent addition to Columbia's storied football history is the annual Liberty Cup game with crosstown rival Fordham University. This cup was inaugurated in 2002, one year after a Columbia-Fordham game had to be postponed because of the 9/11 terrorist attack, which killed significant numbers of alumni from both schools, including two former Fordham football players. Columbia and Fordham are the only two I-AA schools in NYC, and Fordham is an associate football member of the Patriot League.

As of 2012, Fordham leads the series 7-4. Columbia has won the Cup only once since 2006. Columbia's overall record against Fordham is now 12-9, which includes a Columbia victory in the first game played between the two schools in 1890.

In 2010, Columbia's annual game against Cornell was formally dubbed the "Empire State Bowl", a name that had been informally used for the in-state showdown. The winning team claims possession of a traveling trophy. Columbia won the inaugural fixture, overcoming a two touchdown deficit in the final quarter.

The final weekend of the football season is 'rivalry weekend' for the Ivy League. Harvard and Yale play the laughably self-important "The Game", while Princeton play their fierce mid-atlantic rivals, Penn State. The schedule makers, in their infinite wisdom then decided that Cornell should play Dartmouth, and Columbia should play Brown. It is unclear what kind of 'rivalry' Columbia has with Brown. A fight for the title of most-radical-left-wing-liberal school in the league? We may never know. Either way, Columbia has played Brown in its season finale every year since 1964 except 2001.[11]

In 2005, the athletics administration tried to ban alcohol at football games in a controversy that became known as Bakergate. This proved unwise and unsuccessful. (Some say they reintroduced limited alcohol consumption because no one could rationally cheer for Columbia while sober.)

In late spring of 2013, one player's arrest for a hate crime and the revelation of many players' racist/sexist/homophobic tweets raised concerns about a culture of bigotry on the football team.