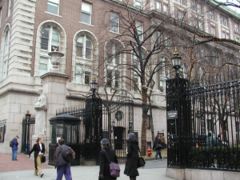 The 116th Street Gates on Broadway

Ironically, the iconic 116th Street Gates on Broadway, are not even the campus' oldest gates, and are in fact a relatively recent addition, a gift of George Delacorte along with its mirror twin on Amsterdam Avenue in 1970.[1][2]Each bears a small plaque that reads "May All Who Enter Find Peace And Welcome". The memorial pylons that are integrated into the gates were once freestanding on the sidewalk of 116th street before the construction of College Walk.

Although today gates are an important icon of life at Columbia, in 1942 the Spectator called for ripping them all down and donating them as scrap metal to the war effort.[3]

Gates are found at the following locations and are open 24-hours, unless otherwise noted:

The university sometimes closes select gates during inclement weather, though the 116th Street gates are virtually always open, closing once a year during University Commencement. The gates also close during citywide emergencies such as September 11th.

The oldest gates on Columbia's campus flank the courtyard in front of St. Paul's Chapel and stand on steps leading from St. Paul's to Fayerweather Hall. The three sets of gates originally stood outside the North Dutch Church on the corner of Fulton and William Streets. The church stood from 1769 until its demolition in 1875, and had served as the site of Columbia's Commencement in 1809. The gates, along with the Midtown Campus gate were donated and erected in memory of Abram S. Hewitt CC 1842.

Standing innocuously between Butler Library and John Jay Hall is one of the few relics of Columbia's Midtown campus. The solid looking free standing gates that open onto Weston Plaza once stood on a 49th Street entrance onto campus, just east of Madison Avenue. Like the North Dutch Church Gates, the Midtown campus gate was erected in memory of Abram S. Hewitt.[4]

Design of the Mapes Memorial Gate 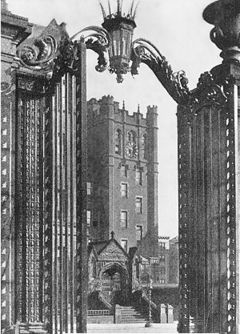 The Class of 1882 Gate on 120th Street. The lamp is no longer part of the gate today

Long before the 116th Street gates were erected, the 'gates' on Columbia's campus referred to the three gates that stood around the Grove on the northern part of campus. The only one remaining today is the Class of 1882 gate on 120th Street, hidden behind CEPSR, and designed by Charles McKim. The other 2 gates, among the most ornate gates to grace Columbia's Morningside Heights campus are a distant memory.

The Mapes Memorial Gate, erected by the Classes of 1890-1892 in memory of Herbert Mapes, who either drowned while bathing or trying to save a woman's life, stood at the 119th Street entrance to the The Grove on Broadway, roughly where the shuttered service entrance between Levien Gymnasium and Chandler Hall is currently located.[5] Originally planned to be temporarily erected on the Midtown campus, it was eventually presented at Commencement in 1898.[6] The Mapes Gate, which had been designed to accommodate carriages, was altered in 1948 to allow the passage of delivery trucks.[7] nevertheless, it suffered serious damage in 1950 when a coal truck drove through it by accident, although it was repaired later that year.[8][9] It's unclear what happened to the Mapes gate, but it was presumably demolished in the course of the construction of Levien and Dodge Fitness Center in the Grove, if not earlier.

At the opposite end of the service driveway, which used to be a scenic path through the now-vanished Grove, stood the Class of 1888 Gate, with a central gate dedicated to the University, flanked by side gates dedicated to the schools of the donor alumni, the School of Arts (the College) and the School of Mines. It was gifted by the Class of 1888 of the College and School of Mines in 1913 as a twenty fifth anniversary gift.[10][11][12] The nature and time of its demolition is also unknown, but it too has been replaced by a less than inspiring industrial-looking service entrance between Schermerhorn Extension and Mudd Hall.